It has been a while since the last update on Matthew and it has been a big week. Matthew has been breathing independently for a few days and has been off dialysis for while. Yesterday they removed his tracheostomy and he no longer requires oxygen.  Slowly he is being released from the lines of machines. His wounds on his arms and legs have healed and look good.

He is aware, talking and thinking deeply. He has been incredibly tired and struggling with the ongoing continual attention he is receiving from the medical team. He is a bit over ICU, beeping machines, people touching and prodding. He can’t wait to be out of there. The ICU staff have been amazing and have been taking him outside in a big chair to get some fresh air on the balcony and feel the wind and rain on his face.

According to the intensivists, he may be out of ICU by the end of next week.  We hope Matthew will go straight to the rehab unit. He is very much looking forward to moving again, although he doesn’t quite know how he will at the moment.

I had a good chat with him this morning. I asked if he was angry, his response was ‘why?’. He then said ‘it was 1 in 2million chance and somebody has to be the one; it is what it is and my job is to focus on getting better.  For now that means physio, my tongue and starting to eat properly’. He says he wants to focus on this and not interested in TV or anything else at the moment. I read him some letters from supporters and he was appreciative. We talked about Diane, and I said that she was amazing and between the two of them they would conquer the world. He responded ‘we already have’.

This week, the kids have had a chance to wash Daddy’s hair, spend time with him on the balcony and generally given him a daily lift. Bit of a party on the balcony today with lollies and Daddy.

Matthew is good in the morning, but by the end of the day finds energy levels dissipate quickly. His stamina will take a while to return – he says his body feels like jelly. In his head, he feels that he will be strong by Christmas. In the rehab process, we will be asking no visitors until Matthew is ready for it and the rehab director noted that end of September may be the timeframe we are thinking before we can consider extending any invites at all. Just to keep you all in the loop!

Matthew told me that he is very goal focused. We know that. He is liking small goals at the moment, the bigger ones are a little harder to process. We get that. This will definitely be on his terms!  And Di’s of course! 🙂

Have a great weekend. 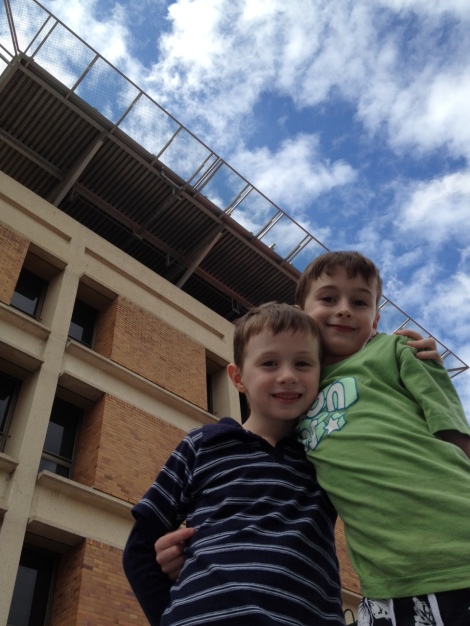 Will and Ben, really excited that the balcony is so close to the hospital’s helipad.