Just letting you know that an update on Matthew’s progress will be broadcast tonight on Sunday Night, before Matthew and Diane head to Sydney and Melbourne for a few days to promote their book Will to Live, which is being released nationally tomorrow (21 July).

Progress on Matthew’s arms is being made quite quickly. Here’s a version of his new training prosthetic I promised a few weeks ago… 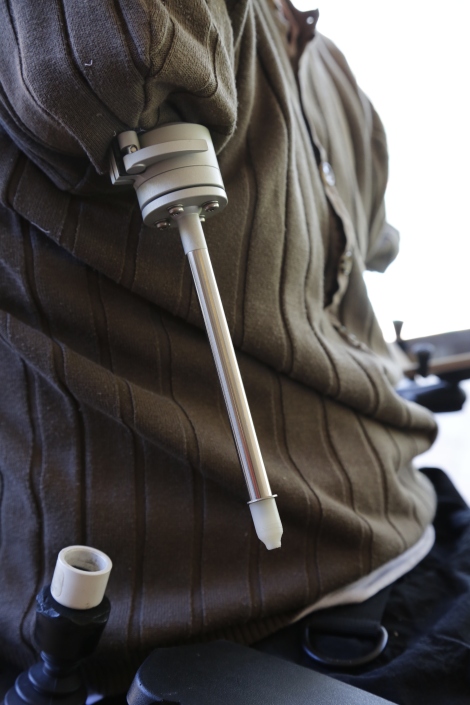 One of the canine nephews, Hamish (a greyhound), enjoying a behind the ear scratch.

You’ll notice over the next few days that he is now wearing two new prosthetics that look like cannisters. We were reflecting yesterday that they really are amazingly attractive pieces of engineering and they have made a huge difference even before the myoelectric arms get fitted, and that’s still a little while off yet.

As we move into another exciting phase, we would like to send our love to the family of our great friends and supporters, Tricia and Mac Hogarth. Mac passed away earlier this year after a sudden illness, and tragically Tricia also succumbed to an unrelated but sudden illness and will be laid to rest tomorrow morning. Tricia and Mac were regular visitors to Matthew in rehabilitation, attended and contributed to fundraising events, and have provided valuable support to our parents over the past two years. It is a reminder of the fragility of life and the fine balance between joy and sadness that can come in a single day.

Thanks to everyone for the kind words about the book and we hope you enjoy the update tonight.