Happy new year and we can’t believe it’s February already.We have had a lot of lovely messages over the Christmas and New Year period, so thanks to everyone who has made contact with us.

Progress generally has slowed and life has taken on a ‘one step forward, a few steps backwards’ momentum, although it’s always forward generally. It seems that reality is the bed-mistress of hope.

After some deliberation and a lot of research, Matthew decided to proceed with  Targeted Muscle Re-innervation (TMR) surgery which required another trip to the US. Matt and Di travelled to Chicago for 12 days in October/November while our Mum and Dad kept home fires burning. It was a big surgery and took longer to recover than anticipated. The phantom pain was excruciating, and Matthew sought painkillers, which is quite rare for him. Upon return to Australia, Matthew had a reaction to these. Di had to take him to the emergency department when he became too unwell to come to a family party, and he was hospitalised overnight. We all had a few flashbacks and went to a familiar place for a short while, and so had a few quiet moments on our sister Rachel’s back deck. That was short-lived, however, and Matthew rebounded to his usual self after a few days and a change in medication.

As far as we are aware, Matthew is the first Australian to undertake this surgery (let us know if you know otherwise!) and his OPRA Osseointegration surgical team from Melbourne travelled to Chicago to observe the surgery and learn the technique. As a result, it looks like the procedure will be available to others in Australia over the next year which is great news. 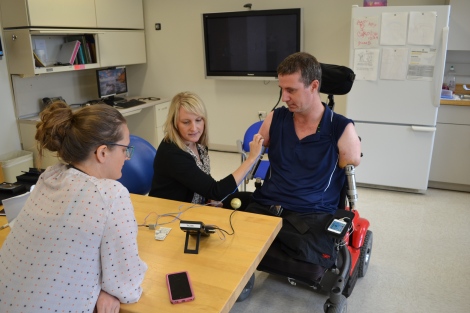 Matthew with members of the team at the Rehabilitation Institution of Chicago. He was being tested just after he had the surgery to make sure he still had signals coming out of his muscles. This was to make sure he hadn’t gone backwards after the surgery. 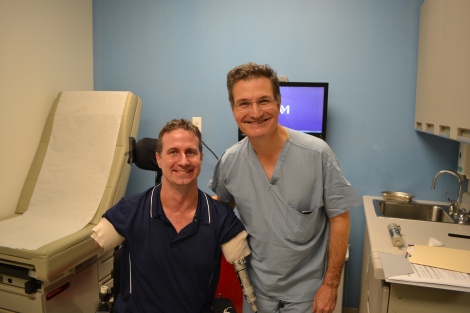 Dr Greg Dumanian, who invented TMR, with Matthew. He led the team at Northwestern Medical Group who conducted the surgery and his enthusiasm and support was inspiring.

Before his surgery, Matthew had the opportunity to travel to New Plymouth in New Zealand and Roma in western Queensland to catch up with his Origin Energy colleagues. The purpose of both trips was to talk about resilience to employees, some of whom are facing an uncertain future in difficult times for the resource sector. Matthew’s trip to Roma was particularly emotional for him as he had been involved in the environmental approval process for the project but became sick before the plant had been commissioned. He said it was fantastic to meet up with some former colleagues and the hospitality was amazing. Matthew stayed at the mining camp, which had wheelchair accessible cabins and he was able to tour the plant because there were ramps everywhere.

Matthew with the Origin team at Condabri Gas Plant in Roma.

Matthew with his Origin friends and colleagues Martin Riley (left) and Brad Robertson (right). Matthew hadn’t seen Brad since he became ill, and Matthew said he was quite emotional about the trip. He has enjoyed the opportunity to continue his association with Origin who have been so supportive of him over the past three years.

In addition to a few trips and speeches, Matthew has finished his company director’s course and is reminding himself of how to study for his final exam and assignment.

And of course there was Christmas. Matthew’s arms have been holidaying in various locations. They needed to be reconfigured to work with his muscles after the surgery. His right arm went to Melbourne over Christmas and after it returned, his left arm decided to go for a break in Utah for a few weeks. Matthew is still only one armed, and he’s expecting to have them both back on and working in a couple of weeks’ time.

Matthew also has a new pair of legs. The new pair has a foot that gives feedback and makes it a lot easier to stand because it provides greater stability. He has only had these for a few weeks, and says he found the transition to this new set very difficult. Some adjustments to position have made a really big difference and now things are going well. His objective is to sit on a chair, so he’s looking forward to jacking himself up a little higher incrementally until he gets to that as his first goal. He continues to be a master of the art of patience.

Everyday life continues to be great – there’s always a lot going on. With all four children now at school, Matthew says one of the bonuses about what has happened to him is that he can supervise homework, which he otherwise wouldn’t have been able to do.

Until next time, we hope life treats you well.