As most of you would be aware, this weekend marks the one year anniversary of Matthew’s amputations. It’s a milestone in that for some of us, it’s the point of moving on. All those ‘first time since’ moments, such as birthdays and anniversaries, have passed, and it’s been a good opportunity to reflect on how much has changed in our lives, and for the better.

Tomorrow (Saturday 15 June), an article will be published in the Q Weekend, the magazine lift-out in Brisbane’s Courier-Mail newspaper. Written by me (Kate), it’s a story familiar to those who have followed the story from its early days, but will introduce Matthew to a new group of people. The opportunity for me to write the story allowed us to tell the story from our perspective, but it also privileged my view of events as the author. It’s important to acknowledge Rachel, whom most of you would know as the backbone of the operation, our parents, and Diane’s sister Jenny and wider family, and the (literally) hundreds of friends, extended family, medical staff and others who have been part of the journey. There were only so many words, so inclusion and acknowledgment of everyone is impossible, but you are all important.

Taking the step to telling Matthew’s story publicly in this way is a big one. Questions about what we will hope to achieve and what the consequences will be were discussed before we agreed to proceed. There’s really only one motivating factor, which is that the children are able to go out with their father, and instead of people staring at him and wondering who he is, which they do now, people will say, ‘Oh, that’s that guy we read about’. Matthew doesn’t care about people who stare, but it’s an important distinction for the children. Time will tell if the story makes a difference.

We were going through the photo archives, and found some early photos that highlight just how far Matthew has come in actually such a short period of time given how ill he was. Most of these haven’t been previously published. It’s actually easy to forget, when things are going so well, how close we came to losing him, and how precious life is. Every minute of every day, someone somewhere is struggling with similar tragedy. Matthew’s is only one story, but for those of us who know him, he is happy to be the great leveller and reminder of what’s important. 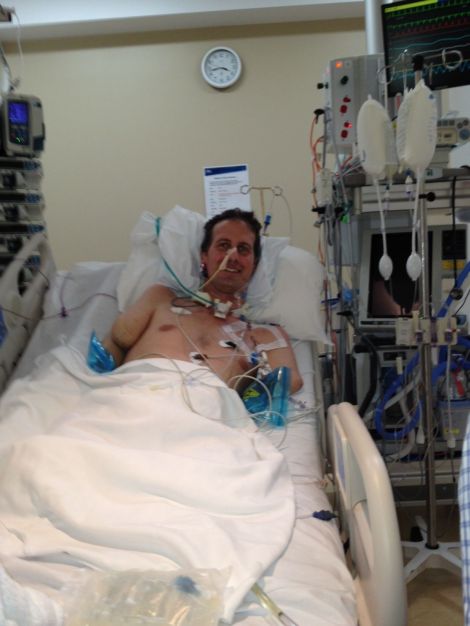 One of Matthew’s aims was to remove one wire at a time. You can understand why!

Ben showing Matthew his artwork from school. Afternoon visits to ICU and then rehab were part of the routine for nine months. 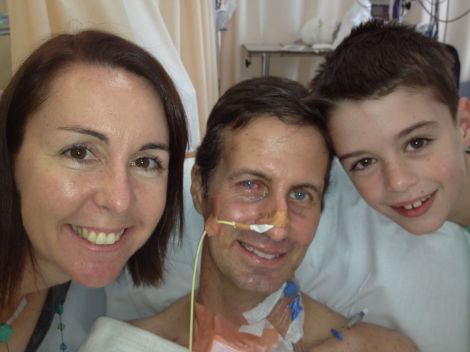 In the early days, Matthew battled an ongoing infection in his eye. His retina later detached, requiring an operation. Clearly uncomfortable, his attitude at the time was an indicator of that to come.

Rachel, Dad (Roy), and Emily with Matthew on the balcony. It was his first day outside.

Emily with Matthew on the balcony. She was stroking him, and just so glad to have him back.

Ben showing Matthew his artwork from school. Afternoon visits to ICU and then rehab were part of the routine for nine months.

In the early days, Matthew battled an ongoing infection in his eye. His retina later detached, requiring an operation. Clearly uncomfortable, his attitude at the time was an indicator of that to come.

Emily with Matthew on the balcony. She was stroking him, and just so glad to have him back.

Diane, Will, Matthew, Emily, and Ben, on the balcony. 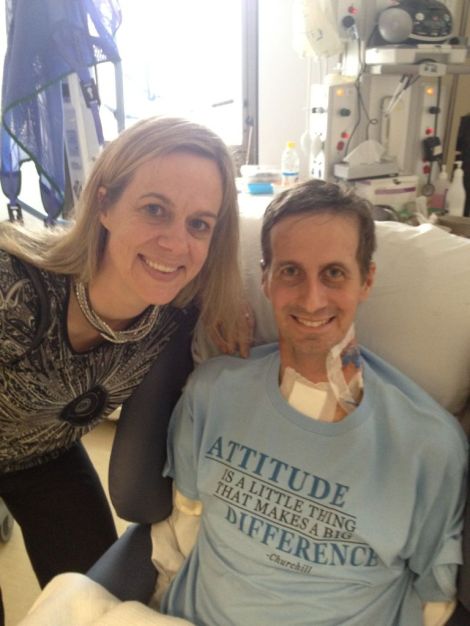 Rachel’s our organiser. Here she is with Matthew, who is modelling one of the t-shirts she ordered early on in the piece to set the tone. 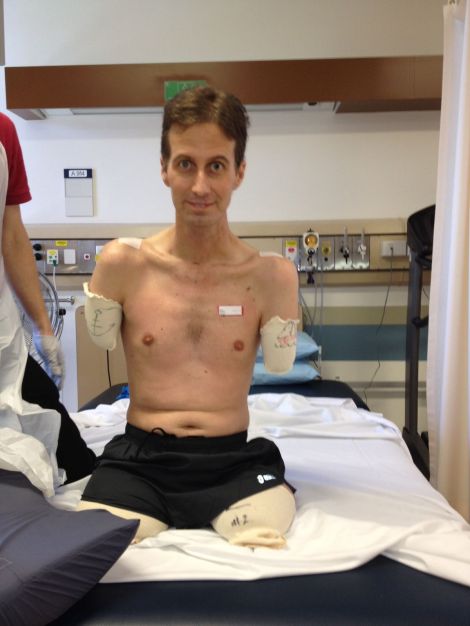 Matthew pushed hard to come off the feeding tubes and ventilator. He had to learn to eat again after damage to his tongue, and ‘lost a bit of condition’ in the process. It meant, however, that he could talk, which was important. 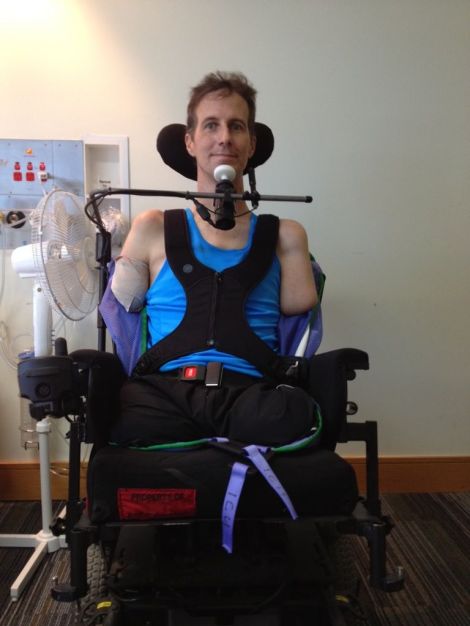 The start of the road to independence with a new wheelchair.

Cups of coffee are good, even through a straw. 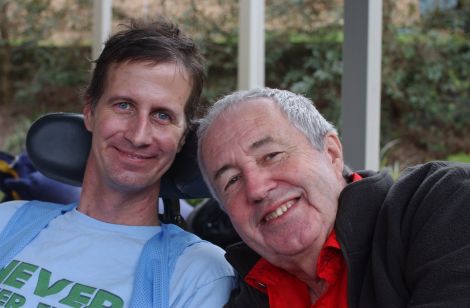 Matthew with Dad. This was taken at Matthew’s first trip home as a surprise for two hours for Luke’s birthday.

One for Dad, one for me. Emily has a go at feeding Matthew on his trip home for Luke’s birthday.

Jacqui (Wright, Matthew’s physiotherapist) gets Matthew ready to test pressure on his stumps for the first time.

There are always upsides, including built-in transport for the boys on a day trip to Australia Zoo in November.

It took a few attempts to find a vest that would enable Matthew to float. He still needs someone to hold him up, and Di is very happy to oblige. This is one of those ‘Romeo and Juliet’ photos – quite common with these two!

That’s it for now. Onwards and upwards :).